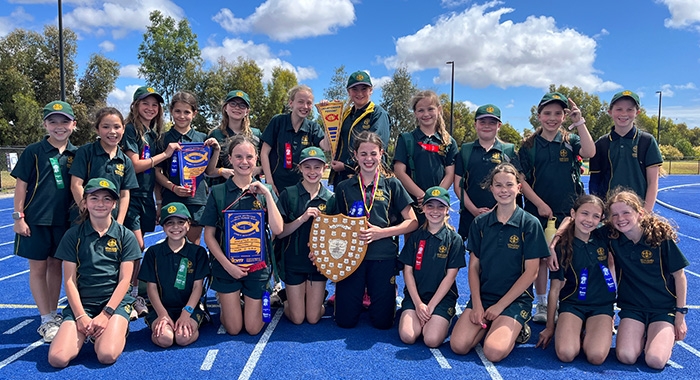 From The Primary Sports Desk

By Jeffrey Wray Email this article

Primary Athletics 2022 has come to its conclusion with the Section 1 SACPSSA (Catholic Schools) Athletics Carnival where Year 3 students competed against other schools for the first time. With 11 divisions across the Catholic Schools in South Australia, it is a privilege to be competing in the top division.

The SACPSSA competition has more track events than School Sport SA (SAPSASA), and also allows for more competitiors. As a result, we are able to take a team of more than 60 students from Year 3 to Year 6. One of the key components of the SACPSSA Carnival for Division 1 is the Pentathlon where of students compete in the 60m hurdles, 100m, 800m, long jump and shot put to accumulate points to determine an overall winning athlete.

For Mercedes College the Pentathlon was completed by Maggie Robinson and Charlie Coligan. Maggie, who was fresh off her return as the South Australian Athletics Captain the week prior at Nationals, won all 5 of her events. This included breaking the 800m record in an uncontested race. In the males competition, Charlie won the 800m and shot put, but this unfortunately did not get him the win overall. Charlie did break the shot put record that existed prior to the 2022 Carnivals, but unfortunately the record was further broken by a student from another school.

We had a number of outstanding performances, and a few that deserve special recognition are: